The Rain Before THE Rain

The air might smell like the copious raindrops that fill it, or like salt marsh, but my nose is stuffy. I guess that’s what I get for surfing in hypothermia-inducing, upwelled waters this afternoon. I paddled out amid the hordes at Manasquan, even though the cloud formations indicated impending doom and the water was painfully cold, because the waves actually had faces. Faces on which I could make use of the very minor trickage I have in my arsenal. The wind was blowing hard out of the south, but the jetty blocked it and surprisingly smooth peaks remained. Anyway, after about 30 seconds, my core ceased circulation to my extremities and now I can’t smell anything.

“Chance of rain: 90%,” The Weather Channel tells me. Every ten minutes. The local forecast breaks up the round-the-clock coverage of Hurricane Irene, which they’re saying could be a 100-year event–especially in terms of flooding. In terms of other things, well, the mayor just called and said a voluntary evacuation is in effect for the barrier island. I received a Facebook message from the Garden State Grudge Match Trials: “No comp due to evacs! Go surf, have fun, & be safe!”

“A hurricane watch and a flood watch have been issued for our area.”

Irene is on-track to clobber New York City. The last time the city saw a hurricane was more than a hundred years ago. If I were still living in the city, I’d evac for sure. Fuck those sheets of glass falling from the sky.

Magic Seaweed is saying we’ll get a 15.5-foot swell on Sunday. Will anyone be there to see it?

END_OF_DOCUMENT_TOKEN_TO_BE_REPLACED 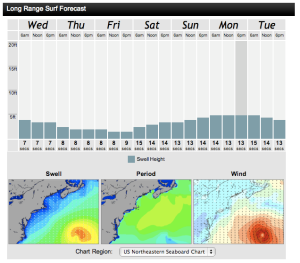 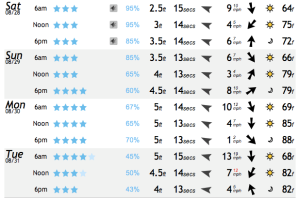