The Science Behind The Sand Behind Sandy: The Garden State’s Run of All-time Waves

Between “Superstorm” Sandy and New Year’s, the East Coast experienced a run of swell that will probably become Tri-state lore. Yes, the window of opportunity was unusually lengthy. Yes, the Mayan calendar was involved. But the main reason why we’ll be talking about Dirty Jerz’s “Doomsday swell” and its siblings for years to come is that when they hit the ravaged coastline, they turned into immaculate, occasionally monstrous waves. Waves for days, you might even say. The likes of which haven’t been seen around here in, well, possibly ever. Some may call it divine justice, but it’s more like environmental recompense: It turns out that there’s scientific evidence that Sandy is actually behind the Right Coast’s firing good fortune.

“That swell before Christmas (the “Doomsday swell”), I think that might have been the best I’ve ever seen Bay Head [New Jersey],” says Billabong rider (and local legend) Sam Hammer. “There was like a four-hour period there where I’d never seen it consistently that size with the shape it had. And it wasn’t getting smaller. That just… doesn’t happen,” he laughs. “I don’t think I’ve ever seen it look like that.”

END_OF_DOCUMENT_TOKEN_TO_BE_REPLACED

Stuck in a Corner With You: An Ode to the Claw.

The best kind of cornered. With Dot, Freddy, and B Bins.

The Crab’s Claw Inn. An institution. -al establishment. I’ve been familiar with the Claw for years, but I only began to properly cherish it this past summer, while working next door at Shaded Vision. (An institution.)

On Friday, the Claw re-opened its door to the public for the first time since Superslut –storm Sandy. When I arrived at 10 p.m., the place was packed with jubilant patrons, doling out hugs and high fives by the hundreds, downing Winter Ales and Yuenglings, and, mostly, smiling. So much smiling.

Houses have been flattened, gutted, renovated, rebuilt. The Heights opened its streets to… everyone. Park residents were allowed to go home. Cheese balls were served. But this? This felt like a real milestone. It felt like the mail man and the boutique owner and the bar owner and your mom’s friend and the pro surfer and the restorer were able, maybe, to feel almost normal again. Maybe. They saw each other with drinks in their hands again, in a place to which they all pledged allegiance, a long time ago, without ever saying a word.

You see, the Claw is like our Central Perk. It’s where we go after work and spend our hard-earned dollars on deliciously unpretentious fare prepared and delivered by people with heart. Where plans are made and friends are met. Where we replenish ourselves after hours in the sea. And remind ourselves that we’ll be in the sea in just hours. We go to eat dinner. Or to skip dinner. We sing and dance, talk story, talk shit, aggrandize waves and fish and babes. Everybody probably doesn’t know your name, but I’d bet that everybody knows your face. It’s where we go when we don’t want to go home, or when we can’t go home. It is a sort of home.

I know how this sounds. It’s not that we’re a bunch of alcoholic bar flies. Because the Claw isn’t really just a bar. It’s an institution. And it’s back.

Here’s some footage of the all-time “Doomsday Swell” in Jerz from a guy named Tony. Tony Hawk. I don’t think it’s that Tony Hawk, but maybe. Anyway, it’s shot in Bay Head an’ it gets real interestin’ right up aroun’ 2:40… 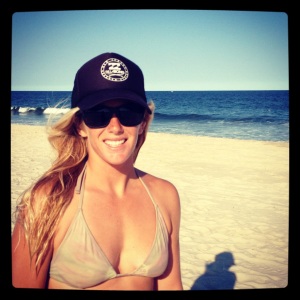 If you happen to…

…Dot Bugbee is your girl. Check out her newly updated site: Bugbeesurfadventures.com.

Dispatches From The Eye Of The Storm. AKA Oh Sandy. Two. 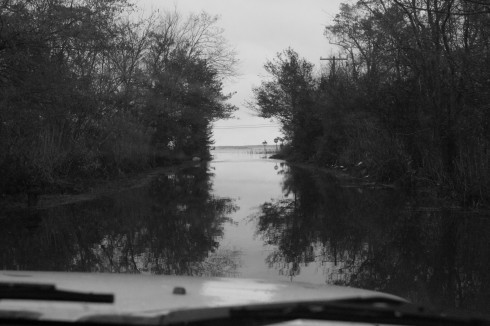 On the morning of Saturday, November 3rd, I wake up at 7:30 a.m. to a dark room. The nightlight I plugged into the wall, a subtle alert to the presence of electricity, is still dim. I grudgingly push two down comforters aside and climb out of bed, wearing the latest in pajama couture: Long socks, shorts, sweats, and a hoodie layered beneath a ski sweater. It’s our sixth day without electricity and it’s 4 degrees in my house. But at least I have a house. I keep reminding myself. So many of my friends lost everything. But at least they are safe.

This headspace is surreal. I remember watching Katrina and her aftermath on the television, and being unable to process what I was seeing. Too much destruction and sorrow. Human kindness–as well as malevolence.

The night before, I sat in my friend’s living room, absorbing borrowed warmth, and watching the nationally televised Sandy benefit concert, broadcast from Rockefeller Center in New York City, where half of Manhattan still didn’t have power. Another friend who made the journey back through the Lincoln Tunnel said returning to the City was the strangest thing she’s ever experienced. It’s hard to fathom New York standing still.

END_OF_DOCUMENT_TOKEN_TO_BE_REPLACED

My parents have a bitey dog and a flair for dramatics. Even if this storm proves to be over-hyped, it’s possible that riding it out with those three will result in bodily harm. Psychological injury is pretty much a given. This is why I have procured a personal wine reserve.

And anyway, Sandy looks unlikely to be a bust, as the projected point of landfall is, give or take three miles, my house.  END_OF_DOCUMENT_TOKEN_TO_BE_REPLACED

The September sessions. So far. 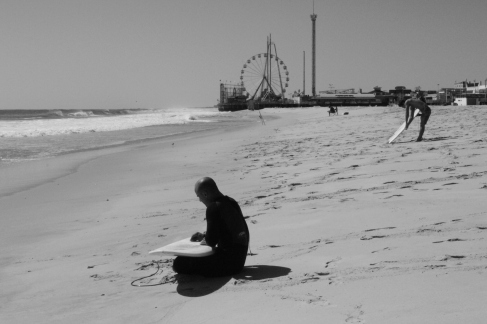 I stumbled out of bed at 5:12 a.m. on Wednesday, washed my face. Changed into a ‘kini. Pulled on cutoff jean shorts. Listened to early morning political discussions while I drove to the island. I grabbed three coffees from Wawa and grabbed two friends from up the street. We checked a spot just to the north and headed for the inlet. Somehow, we found parking. The lineup was a madhouse. Mad people, mad waves. Pulsing, beautiful, large. The skilled, the swell-deprived junkies blocked and dropped in on each other as the unskilled allowed their boards to drag them over the falls on top of their fellow watermen. And women. There were two of us out there. A minuscule percentage.

I managed the paddle out easily, navigated the clean-up sets without incidence, stayed sufficiently out of the way. I sacrificed noteworthy rides for peace of mind. Dot suffered sets on the head and aggro challengers, a board to the mouth. She situated herself amidst the action. Not interested in staying out of your way, sir.

After an hour and a half, I aimed for the beach, only to be tossed around and crushed to the bottom by menacing shorebreak. I clawed my way onto the sand and sat down with a not-so-small effort to refrain from embarrassing collapse. I told myself I’d wait for Leslie to pass before paddling out again.

I stumbled out of bed at 5:32 a.m. on Thursday. END_OF_DOCUMENT_TOKEN_TO_BE_REPLACED

#MDW ushers in the party. The people. The unending well of booze. The chaos.

With summertime on the Jersey Shore comes, at once, free-for-alls and obligations. Work and play overload. Sleep deprivation. Heat, humidity, south wind, and ankle-biter waves.

#LDW ushers in the party. Whisks away the people. The chaos. The booze remains, but the flow is ever so slightly constricted. Beach jobs vanish, but sleep reappears. Kind of.

I’ve been anticipating autumn. My friend asked me why the other day, and I told her that I’ve been living in summer for a year. Which, believe me, is not a complaint. Jetting from last year’s East Coast apple cider season into Gold Coast spring, then from the earliest hints of Sydney fall to May in New York was wonderful, but I want to wear long sleeves. I want to sleep under blankets. I want to exist without a perpetual layer of grimy sweat on my skin. I need a couple of good hair days.

Technically, it’s still summer, but Labor Day weekend is the end of summer for us. I spent the weekend working, non-stop. I feel acutely aware of seasonal shifts after dodging them. On LDW, I juggled Summer Ales with pumpkin lattes, surfed without a wetsuit and then put on a pair of boots. On Monday evening, it was like a switch had been flipped. The rain blew in, the bennies ran out, and the beach remained deserted. The next morning, the wind laid out the sea, the sky turned silver, and we knew that sets weren’t far behind. So, here’s to local summer. To hurricane season. To flavorful beers and free parking and a lack of badge checkers. And waves upon waves upon waves.