Yesterday, I ducked into Eu Yan Sang, a historic medicine house in Chinatown, and grabbed a bottle of tea for my cough. Yes, that is correct: Cough tea. The woman who sold it to me said, “Drink once.” And then added, “Your cough. Do not take chicken or egg.” Not that I eat chicken, but this was news to me. I nodded soberly. 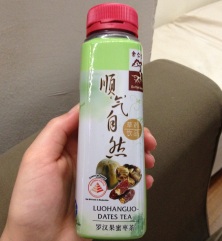 So, for the record, the sugary brew did actually seem to help.

I spent most of the day working on a story before heading off to legendary Little India. To be frank, I don’t see what all of the fuss is about. I mean, there is some quaint, colourful architecture and, yes, an abundance of Indian food. But mostly, there are a lot of dudes walking around in the street and a lot of stores peddling technology on the cheap. Perhaps I missed something. It’s worth seeing, anyway.

From there, I went full-on tourist and took a train to the Singapore Flyer. I reckon if I keep thrusting (went there) myself into situations where I am precariously suspended at great heights, eventually, that tension in my delts will vanish. It hasn’t happened yet. I always pay the $30 excitedly, meander through the pre-ferris wheel display of facts and figures, then look around anxiously at my fellow patrons, hoping for for priests and infants. Or, at the very least, handsome fellas onto whom I can clutch.

This particular giant observation wheel, or “GOW,” happens to be the tallest in the world at 165 metres. It’s a full 30 metres higher than the London Eye, but by my watch, it moves a little slower and feels sturdier. Once I was at the top, I was loving the glorious sight that is Singapore from the sky. So worth the dollars. And they take cards! Post-“flight,” I walked across the DNA (Helix) Bridge to Marina Bay. If you happen to be in the market for some Gucci or some overpriced frozen coffee (which I was, for the latter), go to Marina Bay. Also, if you are hopped up on said coffee, you can seemingly linger here into the late evening hours. The place was bumping well past 9 p.m..

In other news, this morning, I thought a fellow Pillows and Toast Heritage guest was going to electrocute herself while retrieving her toast. With metal tongs. While the toaster was plugged in. I nearly swatted them out of her hand, but she made it out unscathed.

One thought on “Cough Tea and Electric Toast and GOWs”