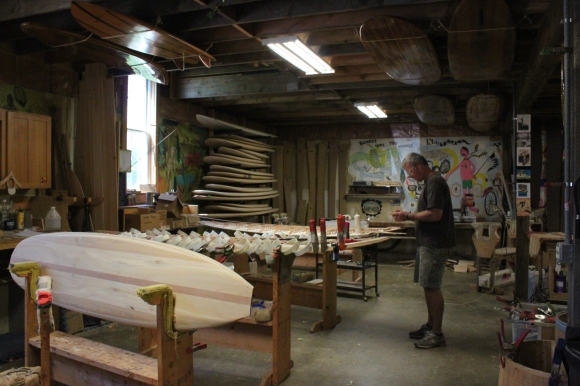 What if surfboards had souls? Surfboards. They do have souls. They’ve got personalities, just like we do. Quirks, habits, and even shortcomings, which we tend to overlook in favor of their more positive attributes. Like a girlfriend who is, actually, pretty high-maintenance, but she’s so ludicrously good at making up, that you’re willing to fight with her. Constantly if need be. Yeah, it’s hard to break up with a board that has the perfect amount of pop or turns on a dime.

But some surfboards are more well-rounded than others. Naturally, some are stronger. Some of them have backbones. Literally. They’re composed of sinews and ribs, and right in the middle of it all: heart. They’re take-home-to-mom caliber. The boards made by Grain Surfboards in York, Maine are that kind of boards. Custom-built, hollow wood beauties. And of course, they exist in a very limited number.

“But,” he continues, “it’s a small part of the business. April through October, classes are kind of our main thing.”

Grain generally offers three types of surfboard building classes, which allow students to do 90 percent of the building themselves: A seven-day course, a four-day “blitz,” and a two-day finless craft class with alaia master Jon Wegener. Grain also sells kits that include all of the necessary ingredients for about half the price; their buyers do 100 percent of the work. Most people opt for the classes.

“It’s really fun to get people working with their hands who don’t typically have an opportunity to do things like this,” LaVecchia says, as he waves his own sturdy hands toward boards in various stages of completion, racked and propped throughout the workshop. “We’re always by their sides to help troubleshoot or fix anything, so we give them the freedom to mess up, knowing that we can make it right.”

East Coast surfing elicits eyebrow raising in many parts of the world. Yes, still. And due to the cold water and perceived lack of waves, Maine may as well be the Moon to most surfers. But Maine technically has more miles of coastline than California (3,478, thanks to its bevy of nooks and crannies) and much of it is surfable. York juts out into the North Atlantic and picks up loads of swell. Its surf scene is burgeoning. Nonetheless it’s hard to get anyone, let alone surfers, to call on coastal Maine and its sub-zero sea breezes in the dead of winter.

“We were kind of twiddling our thumbs,” LaVecchia says. “People are surfing all over the place, but when it’s cold and snowy here, nobody wants to come visit, even though it’s a great time of year to be here. So, we actually had some people ask us about doing classes out West.”

After a successful Kickstarter campaign, Grain bought a mini school bus and a trailer full of tools, which “live” in Los Angeles, and those West Coast classes became a reality. In October, the first of a four-class tour is held in the parking lot of a Patagonia store in Cardiff, Calif. The San Francisco class is held in an old firehouse, owned by a repeat student-turned-friend. After that, Portland, Oregon. This past June, Grain held a class in Patagonia’s New York City store.

“We’re talking about doing an East Coast class tour in late winter or spring,” LaVecchia says. “So, [we’d] cruise down to Florida and do one in every state coming up the coast.”

The construction of a hollow wood board consists of that aforementioned wooden skeleton, bead and cove strips that curve easily to form rails, and eventually, glassing (a lot less of it, thanks to wooden boards’ innate durability). Before anything else, though, a lot of R&D.

“Our board design process is different than most others,” LaVecchia says. While most surfboard shaping is reductive, hollow wooden board building is constructive, and there is no “winging it.”

“We actually have to create a model of a board and then create the frame. There are a lot of extra steps,” he explains. “It’s a little bit harder to experiment with shapes—that’s a down side—but we all enjoy the process so much. It’s really rewarding to build a board and know that it’s going to be around for a long time. And we’re using all local materials: Cedar from the state of Maine, and it’s all sustainably grown.”

LaVecchia grew up building skate ramps. He began riding wooden snowboards and worked for Burton in Vermont for more than a decade before obtaining his U.S. Coast Guard Captain’s License. In 2001, he oversaw the construction of an 88-foot wooden schooner for the Lake Champlain Maritime Museum. The move to York and building wooden boards was an organic one (though not necessarily an easy one), and many of the other co-owners and employees at Grain have similar stories.

Though the LaVecchias (Mike’s brother is surf photographer Nick LaVecchia) grew up riding surfboards, building them began with a lot of trial and error.

“These are some of the first boards,” LaVecchia says, pointing toward behemoth, yet elegant, planked knockouts strung above our heads. “Each one we built, we tried different things.”

“We kind of went back and looked at how people built boards 50, 60, 70 years ago,” he continues. “There was a lot of evolution in board building between the 1940s and the 1960s. People had been riding waves for a thousand years before that, but the boards didn’t really evolve very much. All of a sudden, people were [thinking] about how they could lighten boards up [and] make them perform a little bit better. [Tom Blake] started building hollow boards and he created an internal frame. For maybe 10 years, they were the boards to have, but then other materials—foams and resins and things like that—became available and hollow boards just disappeared.”

Skiers and other board sports athletes are particular about the weight of their equipment. Surfers? Maybe those of us who ride custom boards consider glassing weight, if we consider it at all. Somehow, we collectively decided that lighter equals better. But why? Because lighter boards are easier to carry on land or maneuver in the air?

“We always say that foam wasn’t developed for surfers,” LaVecchia says. “It wasn’t like, ‘Okay, here’s the optimum weight for a six-foot board. There are benefits that come with weight, [like] more speed, momentum, and stability. They have a lot of glide, so getting into waves is really fun, and even if there’s wind or chop, it doesn’t slow you down.”

LaVecchia says that many of their customers actually claim that Grain’s boards feel lighter and more maneuverable in the water, thanks to their speed.

“We actually just finished developing a mini Simmons,” LaVecchia says. “Hopefully, within the week, we’ll be building the first one.”

“We have some really interesting shapes,” he says, as he walks over to a Bonzer with deep channels on the bottom and then moves on to another board and delineates the qualities that make it particularly well-suited to noseriding.

Grain has 17 shapes in their quiver, so to speak. Most new shapes are added to the lineup after customers request them.

“We usually build ourselves a [copy] and try it out, to see how we like it. If it’s good, then we’ll [add it],” LaVecchia says. “This mini Simmons is something that we’ve all wanted for a long time and we actually have an order for one, but we knew that it would do well; people really like it. ”

While we’re talking, a guy strolls in who’s tanned and clearly just passing through (read: doesn’t have to surf in booties in the middle of summer). The shop oozes good vibes and welcomes visitors. This particular visitor is from California and is signed up for the October class in Cardiff. Grain will go to him later this year, but today, he’s another guy who made it to York with hearts in his eyes,­ and he’s a welcome reminder that the most enlightened surfers value not only the sun, but the Moon.

*This vagrant story was written last year, and Grain has since added some new classes, and the mini Simmons is now part of their quiver. (It’s beautiful, naturally.) To learn more about classes and kits, or just ogle Mike and the guys’ stunning work, visit grainsurfboards.com.