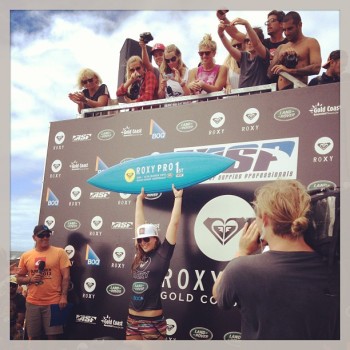 TYLER WRIGHT
rose to the top with nary a trace of ambition.
Her trick?
No tricks.

The sun is yet to rise. Tyler Wright is in good spirits, carefully studying invisible waves on a barely discernible horizon. Nearby, Carissa Moore also stares seaward as Praia do Guincho in Portugal comes to life before them. They are locked in a quietly blazing battle. It’s only the top of the world that’s at stake.

Thirty hours later, Tyler’s second in the world with no hopes of climbing higher, at least not this year. She congratulates, hugs, and laughs with the woman who took the title from her hands. But you see, she never, actually, saw it as hers. She never expected to be in contention for a world championship. She found herself here. And instead of succumbing to the pressure that accompanies such a situation, Tyler simply ignored it.

At the 2013 Rip Curl Pro Bells Beach, the third of a then-indeterminate number of events, Tyler and Carissa faced each other in a final for the second time that year. It was Tyler’s third in three contests. It was the start of the title race that wasn’t. Partly because the race was all but deadlocked until its conclusion, and partly because one of the top contenders wasn’t acknowledging its existence. It was early to start sniffing around for a title battle, but with a slew of head-to-heads, it was hard not to. By the time Tyler won in Rio, at the fifth event of the year, she was still saying that a world championship cup was the last thing on her mind. It seemed unfathomable that Tyler was truly indifferent to the title race. How could she be?

But her story remained consistent and her smooth exterior never once betrayed a glory-hungry monster within. So, I started to believe that there wasn’t one.  END_OF_DOCUMENT_TOKEN_TO_BE_REPLACED

The year is new.

Oh, so it is. I’m usually much more on top of my New Year’s posts, but 2013 was one heck of a year and I wasn’t really sure where to start. Then I thought, I’ll just begin with what’s always closest to my heart: the food. (And drink.) And I’m gonna preemptively put a few dollars in the proverbial jar, because I’m about to sound like a… well, maybe just don’t read this if you’re prone to fits of jealous rage. Right, the food…  END_OF_DOCUMENT_TOKEN_TO_BE_REPLACED

Mainstreaming: Not Just For Vampires Anymore?

Arguably, one of the most magnificent and heartening things about surfing is its unchainable cool. Truly not giving a damn, yet harbouring, deep down, the utmost in passion. Having few resources and finding a way. Looking and behaving in manners not suitable for most dinner parties. Unless you’re amongst like-minded diners. Which, thankfully, most of us are. So, the question is, can Woolies ever be a like-minded diner?

Read about big corpos and surfing here on ASL.

I wrote this post about Bells a few months back…

Day 2. The sun is piercing the super translucent remnants of the marine layer mixed with wildfire haze; a virginal veil over the pristine beauty that is Victoria’s rugged coastline. It hits the gold-grey sand and wheat-coloured cliffs, refracting off of the glass-smooth faces pounding Winkipop with a deceptive grace. Overhead sets wrap ‘round the point at Rincon. Thousands of millimetres of lens are trained on the Bowl. Jet skis rear and climb peaks, dive down their spines. Julian snaps, hacks, cuts.

Day 4. Gale-force winds ravage the contest site shortly after an emotional Mick Fanning is presented with his bell trophy. As he gives an interview to Channel 9, the gusts apparently level every section of fence bearing a past champion’s photograph. Except one: Michael Peterson. Talk about eerie. The late legend was the very first champion of the Bells Easter comp in 1973.

The weather had been warm and sunny all week–atypical for Easter in Victoria, and it actually began turning during the men’s final. The clouds rolled in as the crowd on the beach shared a moment commemorating MP. “Hells Bells” played on the loudspeakers and goose bumps rose on our arms. Someone said, “It would be fitting if a ‘Cooly kid’ won this year.” This 51st year. Kelly flew and spun and stuck, but Mick rode Bells as Bells likes to be ridden–with power, style, control. And win a Cooly kid did.  END_OF_DOCUMENT_TOKEN_TO_BE_REPLACED