Circumnavigating Part 2: Sydney and The Subs

You know how sometimes on those red-eye, trans-Atlantic flights, 7 hours doesn’t quite cut it? By the time you’ve had your lasagna, watched Nicholas Cage’s latest, and, finally, lulled your brain into a state somewhat resembling sleep, you’ve got to put your seat in an upright position and prepare for landing. Sleep be damned. This is not an issue on the flight from London to Sydney.

Also not an issue: The condensation of time. I leave London Friday night and arrive in Sydney Sunday morning. Just go with it. “We’re not spending much time in Saturday,” Nick says casually. Nick is the amiable British guy to my right. He and his girlfriend, Kate, will be splitting five weeks between New Zealand and Australia. They ask me how I liked London and when I hesitantly say something along the lines of, “It was cool…” they inform (as if it is a fact) me that people in England get friendlier as you climb in latitude. Interesting.

In our stout Saturday, we experience Suvarnabhumi International Airport (and what is visible of Bangkok through the windows) as hot, hazy, and lush. The sun sinks into evening as we begin the second leg of our flight, after just an hour and a half on solid ground. Qantas serves dinner, but I’m still full from breakfast. Somewhere between Thailand and Australia, in the middle of the night, I look out one of the few open windows and observe a stupendous display of lightning: It’s bouncing off the clouds and it’s orange.

Stepping into Australia is like napping on that incredible couch you used to have in that apartment you used to have: Slightly disorienting but oh-so cozy. It’s just after 7 a.m. in Sydney and I am greeted by a chatty man in passport control and a smiling customs officer. And sunshine.

After arriving too early to access my first ever hostel room, I stumble upon Darling Harbour, by which locals seem unimpressed. I think it is beautiful. I can’t believe how many fish and likely poisonous jellyfish are visible right next to the dock. By 4:28 in the afternoon, I am completely exhausted and completely enamored with Sydney.

The hostel, on the other hand, is not doing much to win my favor. The girl at the front desk gave me the wrong change for my key deposit and when I told her, she had to check the surveillance camera to see whether my claim was accurate. They don’t allow alcohol in the building. I feel like I’m back in freshman year at Rutgers. Except there are five other vagabonds in my room, I need a swipe card to use the bathroom, and I’m pretty sure the bedroom door doesn’t really lock.

With sleep-deprived eyeballs, I decide to watch Drive Thru Australia because 6:37 p.m. is clearly too early to go to bed. I don’t make it much past nine, and am wide awake at four the next morning.

The Tim Tam Chiller’s one flaw is that it doesn’t actually have any coffee in it. However, by adding a shot of espresso, it is rendered the perfect way to keep cool in summertime Sydney. Another great way to keep cool is to roam the streets and let copious amounts of wasted energy wash over you: Every shop seems to blast the A/C whilst maintaining a literal open door policy. Not that I’m complaining–I think this is the hottest week that Sydney will see all summer, and at one point, I hover in the doorway of an under-construction bar and chug a half litre of water.

In miles and miles of walking, I note that people in Sydney are damn good-looking. And they look like surfers: sun-tinted. It’s funny, though, because I don’t think the majority of them are. I’m sure there’s some kind of statistic that reveals that while 98% of Sydney residents have, at some point in time, found themselves on surfboards, only 40% of them actually surf regularly. Surf mags are also surprisingly hard to come by. And they cost $9–$14 if you get the “Air Freight” [CURRENT] issue.

Two nights in the dorm on Kent Street are all I can take. Fortuitously, a guy I know from the high school surf team lives in Coogee­–and happens to have a spare room that lacks an occupant. On my fourth morning in Australia, I wake up to the sun rising above the Pacific Ocean. 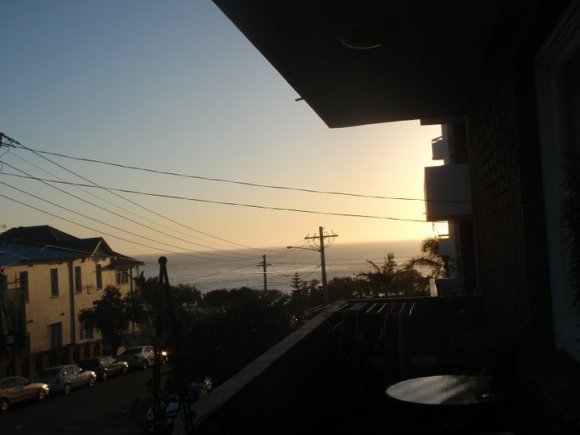 “Friend of a friend who’s a surfer/writer/surf writer from the U.S.” — That’s the subject of the email I send to Jay Killvan. In addition to editing his own site, JK writes for Tracks and he kindly agrees to meet me for an afternoon beer/career advice. He tells me to check out the National Surftag Final up in Avalon. Occy stalking and serious surf hankering ensue.

There’s not really any surf in Coogee, my friend Jon informs me; the closest breaks are Maroubra and Bondi. The prospect of running into the Bra Boys steers me toward Bondi. (I have a weird admiration for/fear of intense localism.) As I don’t have a car, I test out the bus system by meeting another ex-pat friend at the famous crescent, sans board. The waves look fun, and not too crowded in comparison with SoCal. A day or two later, I bus back with the Penguin and buy wax for $5! Well, that’s not technically true; I manage to talk the guy down to $3.95, but still. Paddling out, I am painfully reminded of how long it has been since I last surfed–September. (It’s January.) Though my arms are rubbery, the world feels right again. I don’t even care that I spent all my food money on wax.

I decide to do the highly regarded Coastal Walk from Coogee to Bondi on a day when the sky looks fickle and the ocean ominous. When I round the point at Bronte, I stand, staring, and wonder why Jon didn’t mention surfing here. What was shorebreak in Coogee transmogrified into well-formed bombs in this particular cove.

Maybe the swell has to hit it just right for it to work? Today, the swell is apparently just right. I watch for a good hour (from the pool, from the beach, from the cliff) before continuing the walk. When I reach Bondi 3.5 km later, the waves have become wave; constant whitewater thrashing the beach, not a surfer in sight.

At least five people have told me that I must take the ferry to Manly, so I do. Not content with sitting on the sparsely populated, golden beach, I rent an 8’ foam board for $15. It has an asymmetrical fin setup–and not because some genius discovered it helped him catch rights. It’s also a little holy, but, as I find myself continually reiterating, I am no snob. The waves at Manly are not coming in sets, but rhythmically shoving ashore. After failing to find a proper rip, I paddle for 25 minutes without getting very far. I tend to rely heavily on duckdiving to get outside, and that just doesn’t happen on eight-foot BZs. I feel satisfied with my investment after a handful of lopsided waves. The wind switches just after I exit the water and heaps of bluebottles begin washing onto the sand.

I meet some French Canadians on the ferry and we plan a continuation of my Aussie beer exploration for later that night. When I confide in Andromeda that I’m tired and don’t know if I feel like going into the city, she nicely tells me to stop being a pussy. I counter with, “What if they try to steal my organs or something?”

They do not attempt to harvest my kidneys. In fact, it turns out that they love Bon Jovi and dancing. So do I. And so does Sydney.

One thought on “Circumnavigating Part 2: Sydney and The Subs”