Well, that was a regrettable decision. 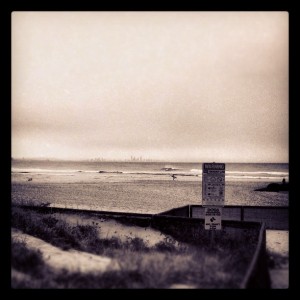 I began the session at Snapper. That’s not the regrettable part. That part turned out to be satisfactory. At least. That part was all fun drops and successful bottom turns and speeding along deep green walls until my legs were tired. In the rain. You know I love it.

I got out of the water at Greenmount feeling pretty content. I was going to find some grub, some caffeine, some motivation. I turned around and scanned the shoreline. Hmm… I wonder what Kirra’s doing down there. I started walking in that direction. Just out of curiosity, really. It looked alright. There appeared to be some good sections, and there were like four guys out. I spotted a rip and started paddling, thinking I’d get a handful of fun shoulders (no barrels, thanks) and then go eat lunch. So, yeah, I was paddling, paddling…

Suddenly, I was faced with this gnarly lip, viciously doubling over. Even with my careful premeditation, I had ended up exactly where I didn’t want to be. And fuck, those waves were a lot bigger than they looked from a few hundred meters away. I made to duck dive. Thumped. As is always the case, the next wave pitched just before I could get my shit together and the only thing going through my head was, Never bail on your board! No choice. 0.67 seconds later: same drill. Washed to the inside, you’d think you’d be safer, but no, there was no belly surfing these savages. Walloped. Yet again.

At that point, I was concerned, primarily, with breathing. And it crossed my mind how humiliating it would be if the Kirra SLSC had to haul me from the surf. That was a regrettable decision. I possibly even said it aloud.

Standing (unsteadily) on solid ground and looking back at the unpredictable, messy, sectiony, closed-out, and, above all, heaving Kirra barrels way out the back, I had a hard time discerning my motives for going out there. I saw nothing in those ugly waves that could have compelled me; it didn’t even look remotely fun. (In retrospect.) And then it hit me: greed.

I haven’t surfed the past couple of days, despite some decent swell, for no reason other than sheer laziness. So, sloth. Then, an evidently misguided confidence in my ability: pride, vanity. Which led me to greed; I couldn’t just walk away. Then, obviously, I recovered by way of gluttony. What’s next, lust? Uhh…

One thought on “Sin.”